can't get you out of my head

Now That I Found You

Take A Chance On Me

Dancing On The Ceiling

Lionel Richie • Dancing On The Ceiling

Cut To The Feeling

The Way You Make Me Feel

Run Away With Me

August 13 3:03 AM
Thx for finally calling kiddo but u think u could've called sooner LOL 🤕
You know how your dad gets!!
his panickedd energy even spread 2 the dog
He peed on me twice 💦 when He was ASLEEP
🤣🤣 the dog not ur Dad
sry dad we're having a sick time
and theres alot on my mind
Oh? Y dont you tell ur old MAN all about it 😎 I miss giving u fatherly advice
My fatherly advice nest has been empty 4 to long
the last time u asked me about Something was so long ago your old man cant even remember 🤧
Not that that means much LOL
Cmonn KC let me help im wiser than I look 👴
??????????
????????
?????
???
??
?
OK OK jesus it's like 3am here dial it back
good thing i wasnt sleeping
Dad is fallible LOL 🙏 Im listening my child
im just yknow worried about Stuff
trying not to fuck it up
and its going good but like almost TOO good right
we never even fight
i mean about real shit outside of how fuckable nick nolte is
ISN'T
He was great in 3 fugitives
I wouldnt kick him out of bed 4 eating crackers 🤠 yeehawww
NOT THE POINT 🤢 fuckin gross
anyway
our 6 month is today and then its his birthday next week and im flipping my shit cuz i dont know what to get him
i suck at gifts!!!!!! good ones!!! remember what i got u and dad for ur 10th??
LOL how could I forget!! Dad keeps it on his desk at his Office 😜 ppl ask him if his toddler made it 4 him
U know he luvs it though, he lUVS ur handcrafted pottery 🧫 even if his paralegals think he has a 3yo at home ROFL!!!
right
and remember what i got u for ur 50th bday??
💵
and I put it toward a new BBQ 🍖 That wasntt TOO bad
..
.....
Ok it wasnt GREAT but you made a nice card and it made ur old man tear up 👨‍👦
U know what they say kc it's the thought that counts!!!
yeah well i got u guys and my friends trained to have no expectations
but i CANT fuck this up its too BIG and i want him to know how important he is to me
everything i think of is stupid af tho and i know hed be ok with almost anything bc he's just LIKE THAT but like
i dont want his students to think he has a 3yo at home ykwim
i dont want to embarass him i want to make him happy and show him i really fucking care
Hmmmmmmmmm ur right this is a thinker but your Dad is going to help you figure this out!!!!
Theo is a good kid 👍 and he's lucky he snared my Number 1 favorite son 🥇
dad
Im putting my thinking cap on 🧢
...
thanks dad 🥺

It's 4:30 in the morning, Japan Standard Time, and Kit's still squinting at his mobile screen—a small beacon of jarring blue light in an otherwise completely inky dark room—waiting for his dad's latest text response. Theo's a pile of motionless limbs and quiet breaths just to his left, burrowed deep in a mess of their covers and taking up most of their shared hotel bed with his sprawl and Kit's slightly underneath him because he has no other choice, their room had come equipped with a queen bed instead of a king though neither one of them were all too bothered enough to complain. They slept tangled up like an indecipherable mass of body parts anyway, and Kit's only concern right then is startling Theo awake with his frenzied phone activity, the way he keeps tapping his screen back to life with a little too much aggression, willing any notifications to manifest other than a swarm of muted calendar alarms every ten minutes forcefully reminding him that today is Their Six Month Anniversary.

It takes herculean effort on Kit's part not to burst into a fit of surprised—horrified—laughter when his dad's response finally comes, but he does full body shudder to fight back the mental imagery of his parents paging eagerly through some mass marketed suburban mommy 50 Shades-inspired erotic coupon book. One that veers as wild as [1] Free Oral Sex! or [1] Naughty Spanking! or [1] Sensual Oil Massage! And he doesn't want to think about that for all the usual reasons but also because he'd hate to doom his parents even mentally to the boring sex life plaguing anyone who'd willingly buy and drive a minivan.

Still, he's grateful. His dad's been on the phone with him for going on forty-five minutes tirelessly offering him gift ideas for Theo's birthday because Kit is almost physically sick with nerves, an essential facet of his personality that he's the biggest absolute fuckhead when it comes to picking out anything more complex or intuitive than an Amazon gift card for birthdays or assorted religious holidays. And granted, he's given Theo presents before. He's cultivated some really fruitful business relationships with a variety of Etsy stores catering to their... uh, unique interests, some have Theo's measurements on record and don't even ask anymore, just make polite inquiries as to minor fluctuations that can happen if Theo's done more biking or wall-crawling than usual.

But that's different, Kit tells himself as he's browsing his list of Etsy bookmarks with frustrated scrutiny, only looking up after a moment or two when Theo's breathing becomes abruptly irregular but he's just squirming, adjusting, sleepily nestling into Kit's trapped shoulder and muttering something incoherent before stilling again. Kit can't help himself, he lowers his phone to lean into his boyfriend's warm sleeping body, breathing in the clean faintly fruity scent of his hair, the traces of minty toothpaste, the lingering spice from some stolen snack he'd stuffed hastily into his mouth before Kit could catch him and make him share. He decides to risk stirring Theo awake by pressing a kiss to whatever upturned planes of Theo's face he can reach—his temple, the high curve of a cheekbone—and feels his roiling stomach start to settle with the first hint of stability he's managed since waking up two hours ago, breath short and panic skittering up and down his spine. 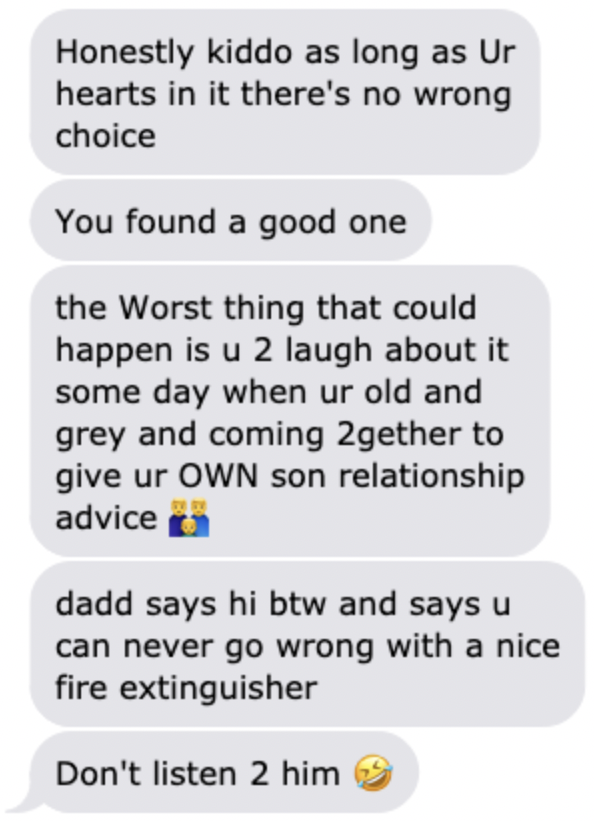